Cornerstone of the chi cycle approach to rapid repair & recovery is a nourishing breakfast, closely following early morning chi focused practice. The preparation and/or cooking and consumption of oats can be harmonious and delicious. Lurking within this deceptively simple cereal grain is a power food waiting to be unleashed on a daily basis.

The wild ancestor of Avena sativa, once called the oat weed, it remained amongst humans wherever possible, leading to its eventual domestication. Much like anything that hangs around us for too long.  Oats are grown throughout the temperate zones and are suitable for human consumption but one of the most common uses is as feed for livestock to fodder upon.

The following twisted testimony is one mans encounter with the humble OAT.

As always, re-printed without regard to copyright, permission of any sort or indeed the writers dignity.

~PEUSLI~
Rolled oats are good for constipation... but who wants constipation?  But seriously, I have muesli with raw-wheatgerm every morning and it goes through you like a run away train.  I’m too scared to leave the house until I’ve been to the toilet coz one morning I left the house before going to the loo and ended up having breakfast twice, once in the kitchen and once in the car seat, if you know what I mean.  I ended up having to turn my wipers on, I didn’t really need to turn my wipers on but, somehow, it made me feel better.

I recently visited an old mate of mine who’s just built one of those fancy new age houses. He’s put in all the latest European-appliances like a dishwasher that looks like a TV and a TV that looks like a laundry cabinet.  I called out from his loo the other day that I couldn’t find the flush-setting, and he yelled back, “That’s the kitchen.” So I switched it to, ‘Slow-Roast’, and told him it was my shout for dinner. 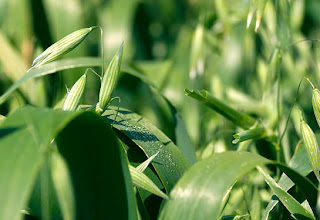 Pure gold, rolled.  Vic Plume is the author of the above story.
I want to meet Avina Sativa.
a:)